Friday morning we headed about 3 1/2 miles north of the town of Alliance, Nebraska, so that we could feast our eyes on this unique sculpture.

This, my friends, is called "Carhenge" and is the brainstorm of a man named Jim Reinders, who studied Stonehenge while living in England. It was his dream to one day recreate Stonehenge in size and proportion. That dream came true in 1987 with the help of many friends.

Carhenge consists of 38 cars - those standing upright are buried in holes 5 feet deep - those on top of other cars are welded together. The diameter of the circle is 96 feet. Carhenge was built as a memorial to Jim Reinders' father, who once lived on the farm where the sculpture now stands.

This is a poem that was written on the bottom of one of the cars. I felt it could apply to Jim and me, traveling from AZ to IL! 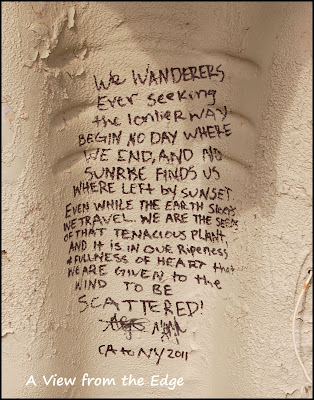 You may notice that the sign at the entrance also states, "Car Art Reserve." 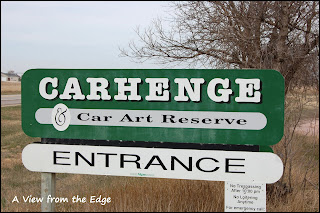 That is because there are other sculptures made out of pieces of cars, such as this Spawning Salmon. 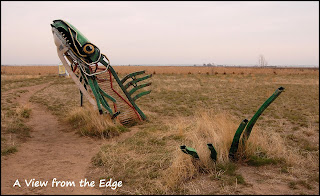 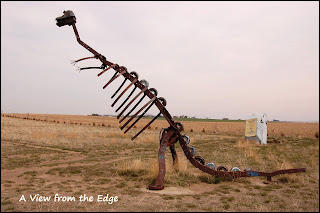 I didn't realize that the next three pictures were part of a group. I just snapped away. I was impressed by this double decker. The front said, "The Fourd Seasons". 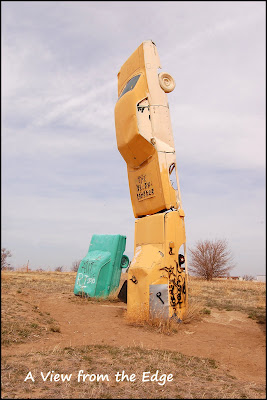 This certainly isn't the pink Cadillac that Mary Kay cosmetics offers to their saleswomen! 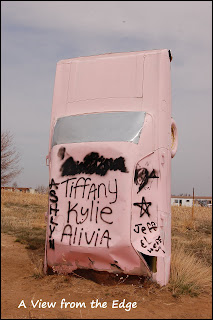 What the...! Is that a picture of a, well, you know, on that car? My, forget TEXAS! I guess things are BIGGER in NEBRASKA! 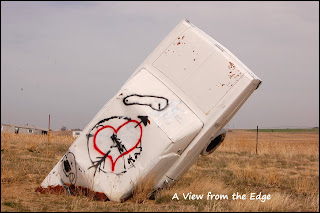 So, the story of "The Fourd Seasons" is that it is supposed to represent the four stages of wheat grown in the area - green for spring, yellow for mature, pink for after harvest in late summer, and white for winter. I found this out AFTER I visited the site. So here is a picture (courtesy of www.carhenge.com) of the four cars together for the full effect. 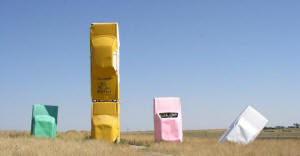 I am not sure if this is supposed to be a coffin and I'm not sure of all the words painted on it. This is what I think it says. 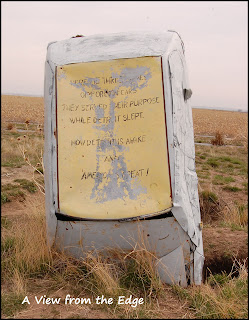 I got a kick out of this piece of graffiti on another car:

Party Hardy Rock & Roll
Drink a 40 smoke a
bole. Were the class you can't
controle. Heres your sign were
the class of 2009. 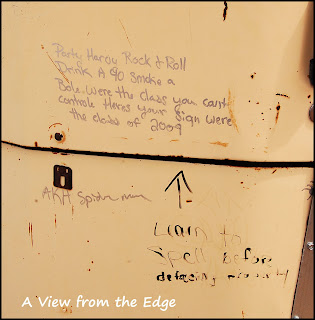 I LOVE how ironic THIS is!

"Learn to spell before defacing property."


We were the only ones wandering the grounds at Carhenge, and the only sound was when either a car passed by every once in awhile, or when the wind blew and these metal "bells" clanged. 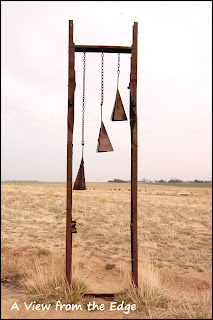 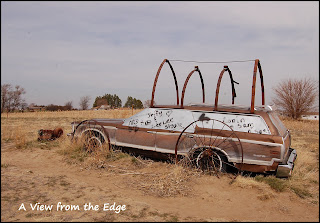 A sculpture made out of an axle and who knows what else! 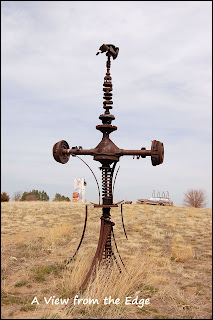 The first thing I thought of when I saw this was, "You've got some 'splaining to do!" 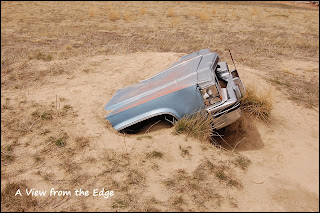 Even the park benches were made from car parts. Looks like the seats are doors and the legs are wheel rims. How clever is that! 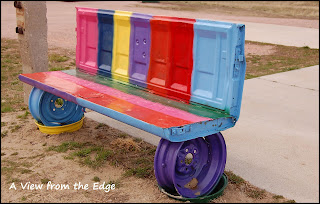 There was a gift store there but unfortunately it was closed. I could order merchandise on line (or you, too, if you prefer) at the above link. 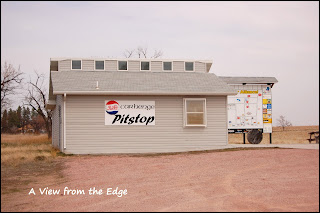 I would highly recommend a visit to the little town of Alliance, Nebraska to see this odd sculpture....it was well worth the drive!

Totally weird - yet somehow intriguing ... You really do get around Pat. Thank you for showing me things I would never, otherwise, have known existed ... or could exist!

OH, I was hoping that's what these pictures were going to be today! It is great when you travel because then we do, too! Do you realize how wonderful blogging has been for our intellectual enrichment of our beautiful country?!!

that is wild...at first I thought it was stone henge, then I saw the cars...so wild:)

That is really cool! I'm going to be driving across the country next month but my route will be South of Nebraska. I wonder if they have anything as interesting as Carhenge in Kansas? :)

I'm seriously envious! I've seen pics of these for years and would love to see it in person.
I love the dinosaur!
The pic you state 'you got some splaining to do' reminds me of a scene in the movie "Tremors"
where the worm eats the car. :)

Great pictures. I would LOVE it there.

I must be different, because I don't see much art in a pile of cars. Unique I'll admit, but it doesn't do much for me. It must take a special type of appreciation. Unlike Stonehenge this stuff will rust away and the rocks of Stonehenge will still be standing. Interesting photos though. Hope you are doing okay and traveling safe.

These are so very clever! I enjoyed every one of them. The bench is totally fun and creative. Reminds me of how I used everything available as a kid to make furniture for my paper dolls — my mom's jewelry boxes, whatever was lying around. The bench is recyclable, functional art!

Pat, you get to see the coolest things! I want to travel w/ you & Jim & big blue! This sculpture garden reminds me of the "Cadillac Ranch" in Texas. I thought that was YOU waving as you drove by Santa Fe, ha ha!
:)

Pat, it's all amazing. I love the salmon and the bench, too. Brilliant. Oh and I'm glad you reassured me that the cars wouldn't fall on you.

Pat, thanks so much for sharing your incredible adventures with us all.
Your photos are fabulous.
I was so pleased to see your comment on my blog which of course,lured me over to your view from the edge!

Strange but awesome all at the same time. Wonderful photos. Thanks for sharing your wonderful adventures. Have a good day !

it's all amazing! can't stop looking at these pictures.

Totally weird and AWESOME!!!! LOVE the pix! Love the bench--I think Kathy should do that and put it on the porch by the store!!! Seriously!