An Unexpected, but Pleasant, Side Trip

Before we left the Holy Family Chapel, we spoke with one of the volunteers there who recommended that we make a stop at the Grotto of the Redemption in West Bend, Iowa. Unfortunately the Grotto is located farther north than the route we were traveling.

I thought it was funny when she asked, "Do you like to gamble?" And her eyes twinkled a bit.

She told me that there was a nice casino near the Grotto!

Is it only me that thinks that is ironic? Sin and redemption in one fell swoop?

Luckily she had another idea that was nearby. She told us about this hideaway place that she takes all her visitors. It was only a few miles down the road. Between Jim and me, we tried to remember the directions and headed out.

We parked the car in the empty lot and headed off towards the Platte River. To the left was a road that was chained off. We walked for awhile and finally got a view of the bridge. 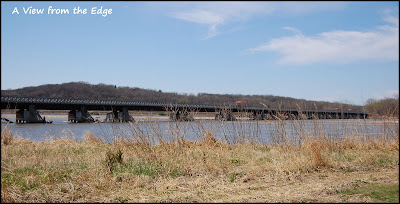 In the early 1800's there were five different railroads competing to provide passenger and freight service between Chicago and Denver. The Rock Island Railroad tried for years to work with its competitors to build a bridge over the Platte River. Finally, in 1890, land in both counties that bordered the river was purchased. In 1893 a 2600-foot long timber bridge was built. This bridge was used for over 90 years. In March 1981, the final train crossed what has now become the Lied Platte River Bridge. In the Spring of 2002, the pedestrian bridge and nearby trails were completed. 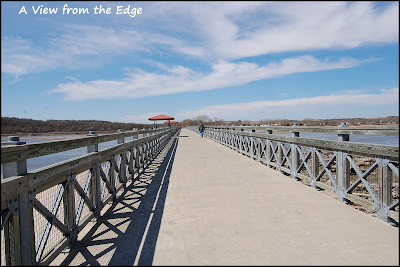 See that red covered area? There are several of them on the bridge. They are sitting areas that jut out from the bridge. 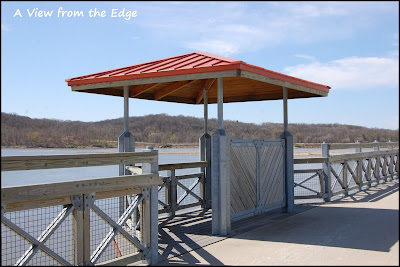 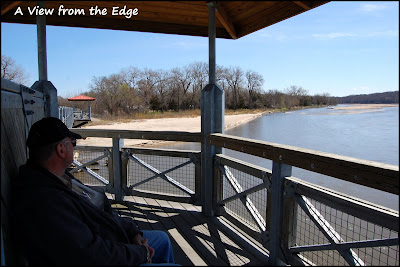 Major pile up near shore. 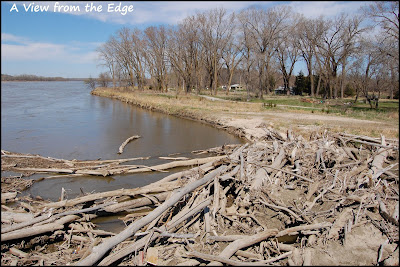 I thought that the big tree trunk on the top looked like a giant's foot; Jim thought the the giant's other foot was by the other arrow. 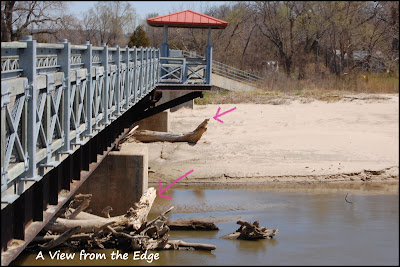 There wasn't a soul around. It was a beautiful area and I'm so glad I struck up a conversation with that woman at the chapel or I wouldn't have known about this place!

Jim decided that we should take a different path on the way back to the truck.

There was a locked gate at the end.

Which we had to climb. 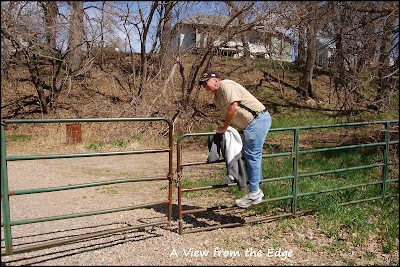 Sure. It was a piece of cake for Jim. He's an old farm boy AND he's almost a FOOT taller than me.

But, not to worry. With a little grunting and groaning, and Jim doing a little pulling, this old gray mare made it over the fence!

Next stop: Strategic Air and Space Museum
Posted by Pat at 6:46 PM

sometimes the unexpected trips are the best. I love the giant feet sticking out from under the bridge...you have an amazing eye :)

Wonderful photos. I love going on your trips with you guys. Have a great day !

I have always loved "side trips". How do you put arrows on the pics (where you pointed out the giant's foot)? I'd really like to know. Is there a button for that in Picnik? As always, love traveling and enjoying your adventures with you two!

so much fun! sounds like a great side trip.

i love little side trips like this to places only the locals really know about that is why it pays to talk to people...

Your photos are so fun. Thanks for taking us along on this trip!

I love your travels!

The unexpected is often the best. I love your journeys, Pat.

Well, now, I just can't imagine you striking up a conversation with a stranger! It does look so peaceful on that bridge. Climbing the gate ..... I may have considered turning around and going back the way I came.

Those are like the corral panels we use that I can jump over in one swift kick if one of the wild~eyed cows gets after me! It's amazin' what an old chick can do when the adrenaline kicks in!

Thanks for lettin' me tag along your trip through your beautiful pictures.

God bless and have a beautiful day sweetie!!!

Hey, pop over and enter my Happy Easter Giveaway if ya get a chance! :o)

Hey sweetie, I just wanted to thank you for hoppin' on my blog. I sure hope you enjoy the ride!

Thanks and have a great day! :o)

hi, found your blog through a comment on Ami.mental
Wow, great photography and enjoying your commentry :) am off to take a tour with you, I'm a bit behind, I'll be one of the stragglers, but don't let me hold you up :)

The locals always know where to find the best hidden spots. Interesting history on the bridge and I think it's great they have added trails and rest stops rather than letting it fall into disuse.