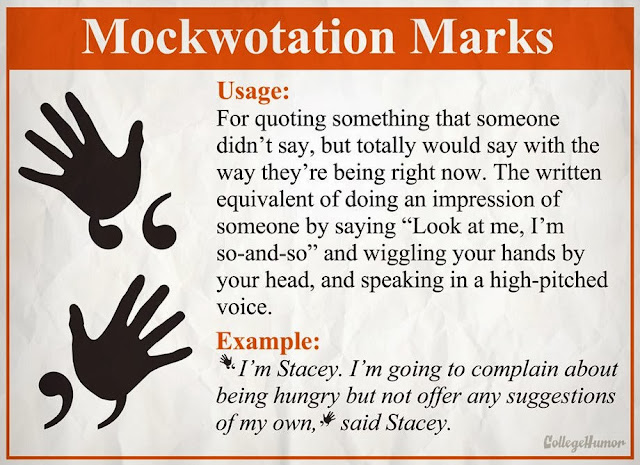 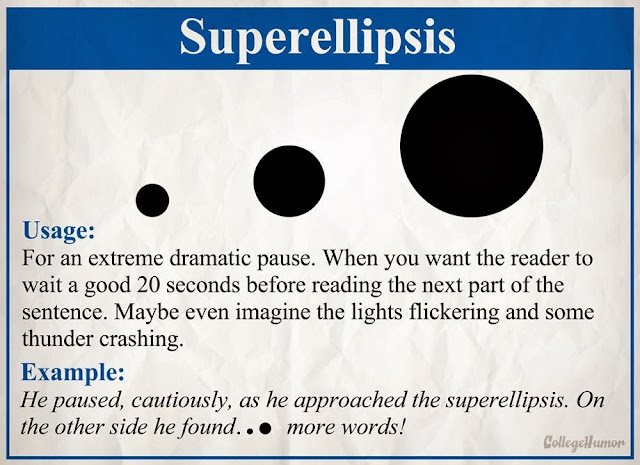 My personal favorites are the Mockwotation Marks and Morgan Freemark. How about you?

These are actual ads that were found in magazines, billboards, and signs. The placement of them are, shall we say, awkward.

Next time you are out and about, see if you can find any "unfortunate" placement ads. I got these from IMGUR albums.

The person who can bring the spirit of laughter
into a room is indeed blessed.

Signs - Across the Line 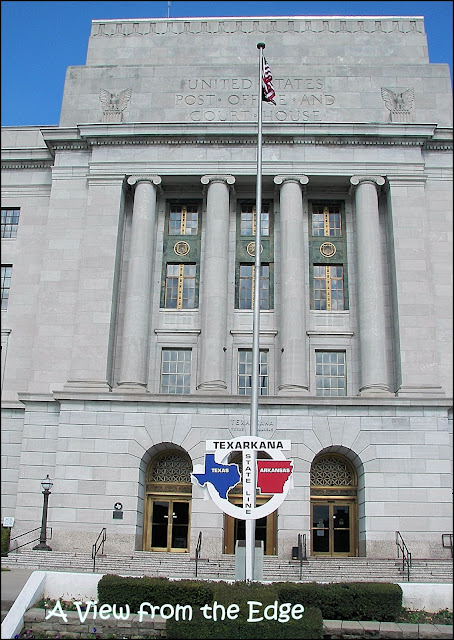 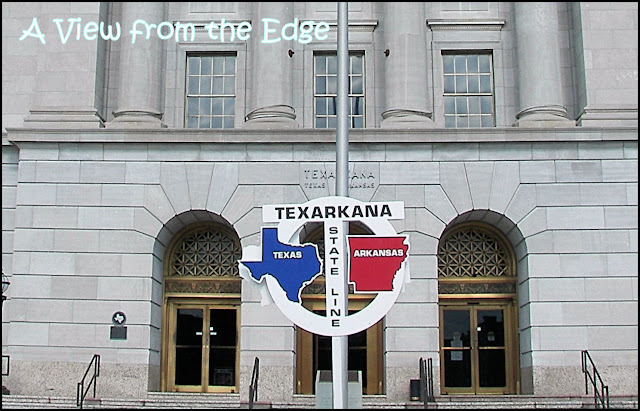 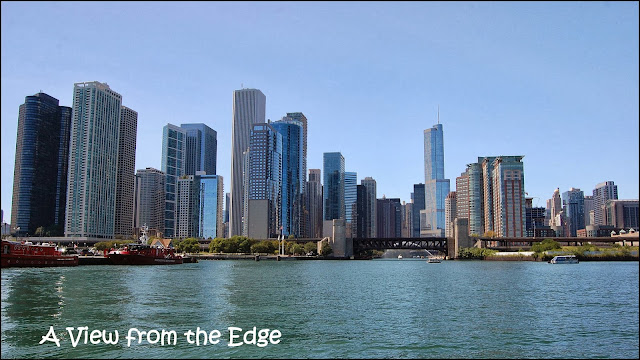 We continue with the architectural tour of Chicago by boat.....


This building with the funny octagonal shape on top started out being called Mather Tower. Then in was listed as the Lincoln Tower in the Michigan-Wacker Historic Roster, and now it is just called by it's address: 75 E. Wacker Drive. Some Chicagoans refer to it as the "inverted spyglass" due to its design. The 21 octagonal stories sit atop 20 stories of the rectangular building. It is Chicago's most slender high-rise, at 100 x 65 at the base, and the very top is only 9 feet across. The building was completely restored in 2002. 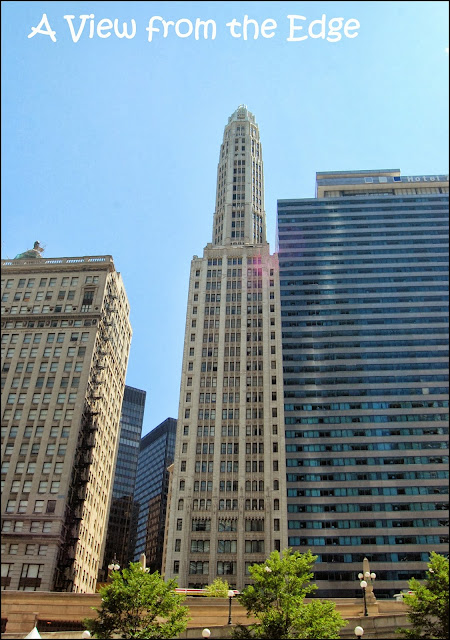 This curved building in the middle is pretty cool looking. It is 333 Wacker Drive. I love the reflections from the buildings across the river. This is an office building, and was featured in the movie, "Ferris Bueller's Day Off" as where Ferris Bueller's father worked. It is 489 feet tall and has 36 floors. 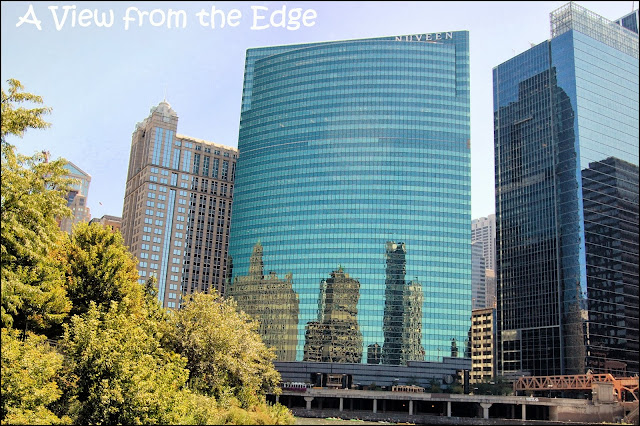 This is the Sheraton Chicago Hotel and Towers that is shaped like a riverboat or paddle wheel boat. (It looks more like it at the other angle, but I wasn't fast enough with my camera!) 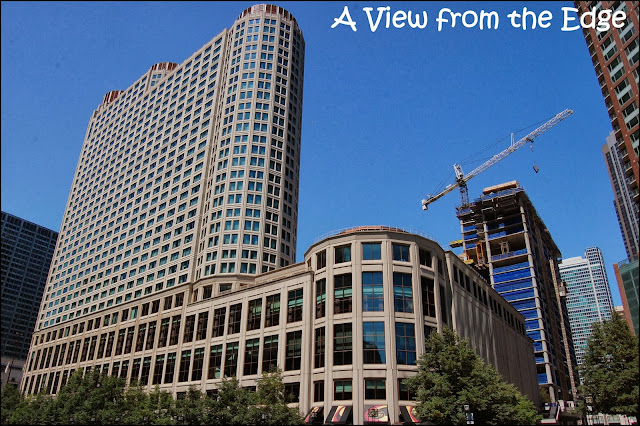 This is the old post office building. Nothing too significant here EXCEPT 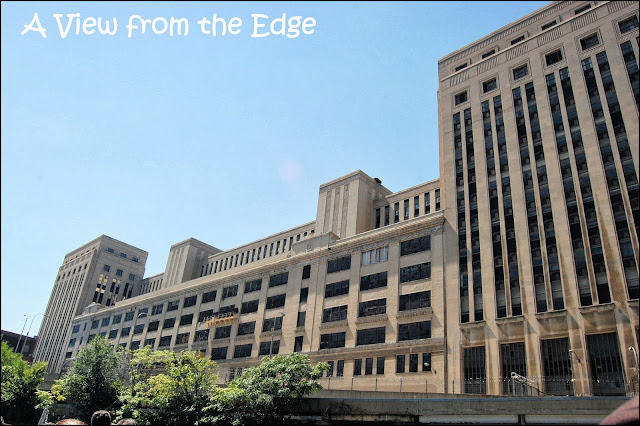 When I zoomed in, I spotted the Chicago Blackhawks' flag, which put a smile on my face. Our hockey team won the Stanley Cup this year. So that building may be old, dilapidated, and most of the windows broken, but somebody sneaked in there and hung that flag! Go Blackhawks! 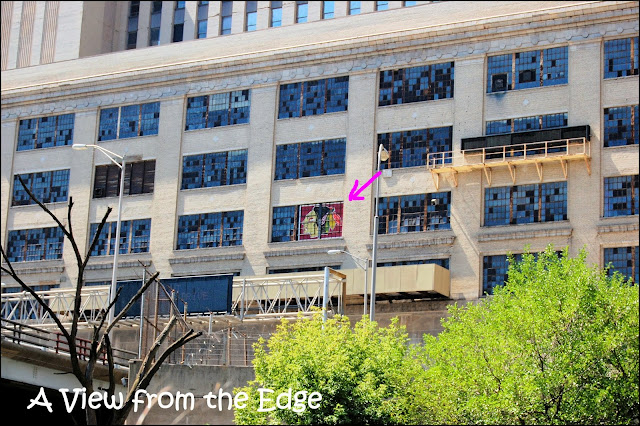 This is the Civic Opera Building, or Lyric Opera House. It is built to look like a large chair/throne. The story goes that a young woman tried to make it in New York, but they turned her down, saying her voice wasn't good enough. So her rich husband built his wife her OWN stage in Chicago - the Civic Opera Building. The back of the chair faces New York - snubbing THEM. The opera house has 3,563 seats, making it the second largest opera auditorium in North America. 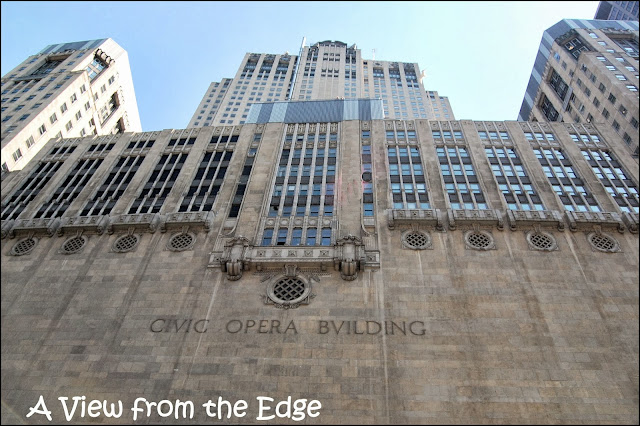 We passed a group of kayakers. Don't know if they belonged to a club, if they were taking an architectural tour via a kayak, or what! 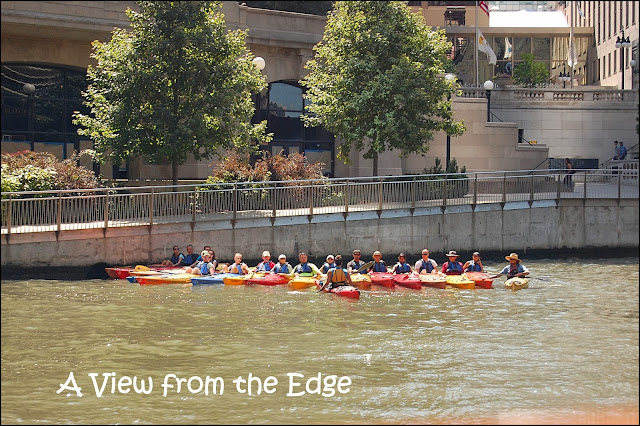 This is River City. They are condos on top of a marina, right on the Chicago River. 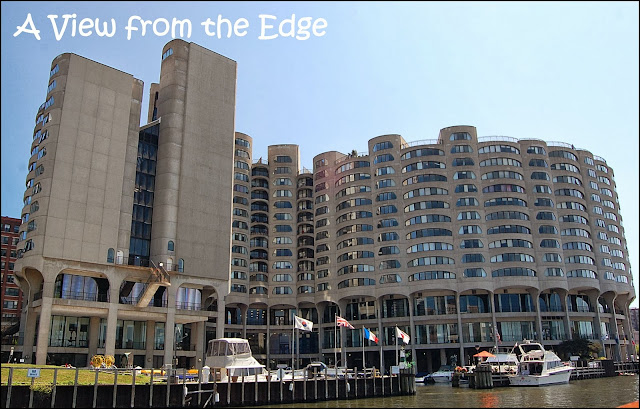 River City on the right looking back towards the skyline; Sear's Tower (tall black building) in background. (It is now called Willis Tower, but it will forever in my mind be called SEARS Tower!) 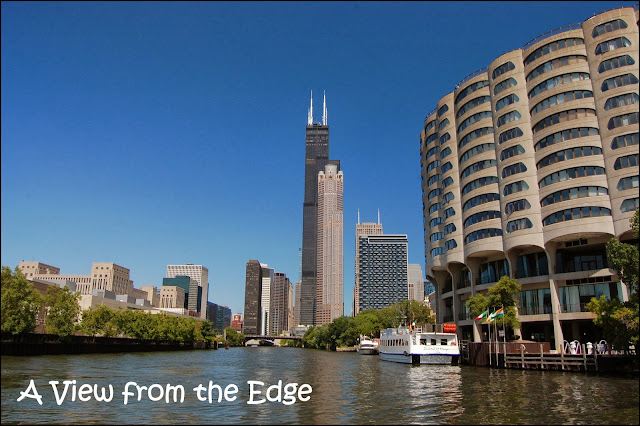 Speaking of ahem, Sears Tower, here is a river view of those skydeck windows 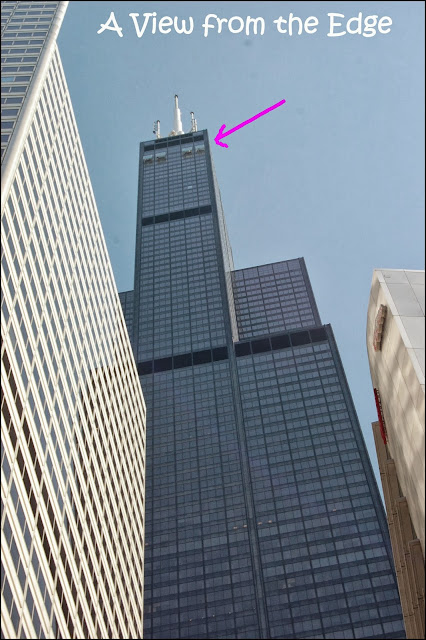 Here is another view:  If you want to see what it looks like from up there, go to my post here. 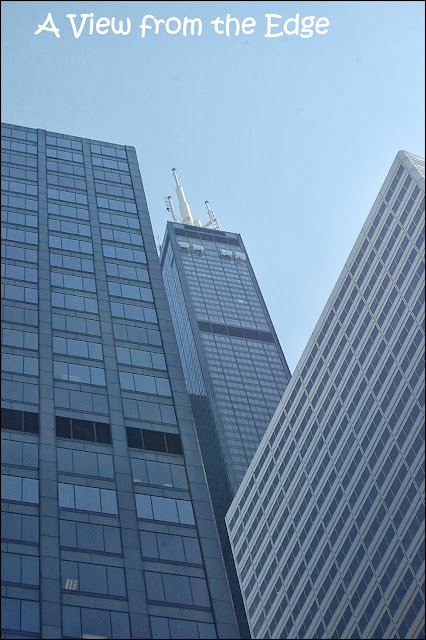 Lake Point Tower - This was the highest reinforced concrete building in the world at the time it was built in 1968. It held the record for tallest residential-only building in Chicago until 2004. Contrary to popular belief, that is NOT a revolving restaurant on top. 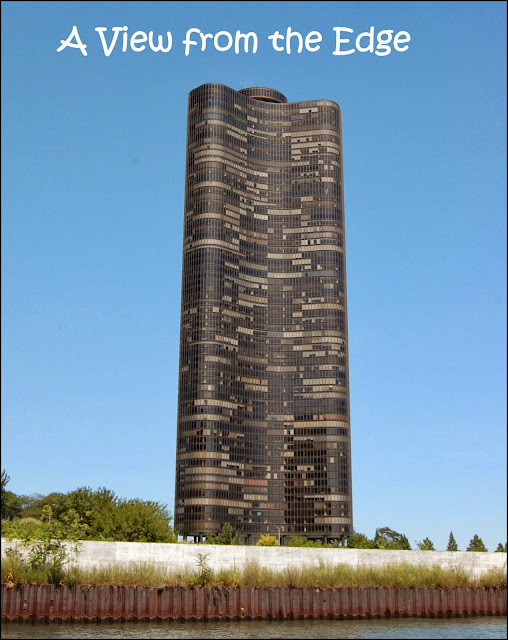 This building is called 311 South Wacker Driver. It is 958 ft tall and has 65 floors. There are two distinguishing features on this building. 1) The color - the building is made with concrete, Texas red granite, and glass. The windows have a bright blue tint on them. 2) the interesting "wedding cake" structure, or crown,  on the roof. "It is a 105-foot tall translucent cylinder, surrounded by four small cylinders.....This makes it one of the most visible Chicago skyscrapers at night as the crown is brightly illuminated. The five cylinders on top are lit at night by 1,852 fluorescent tubes and a lantern at the top changes colors for various holidays and special events." Wikipedia

Our tour guide told us that the lights were so bright that it changed the flight pattern of some birds; they were getting confused as to days and nights. The building had to dim the lights a little after that! 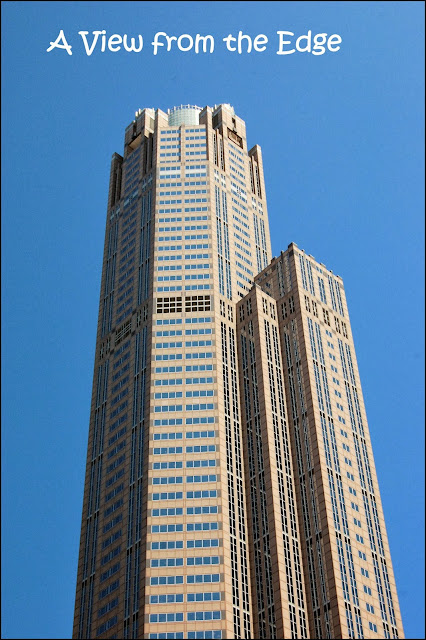 This fountain looks pretty innocuous, BUT 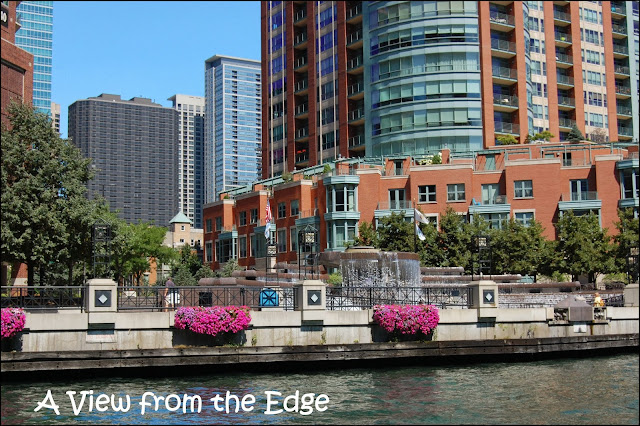 EVERY hour on the hour, it sprays across the river and you COULD get wet. Our boat missed it by 10 minutes, although we would have enjoyed getting wet because it turned out to be a hot day!

Here we are, looking back at the fountain. 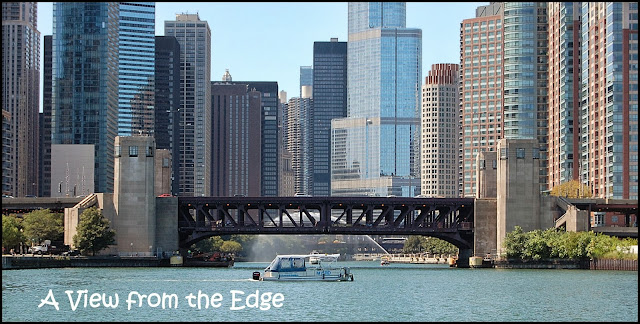 A view of the skyline with the water taxi in the foreground. 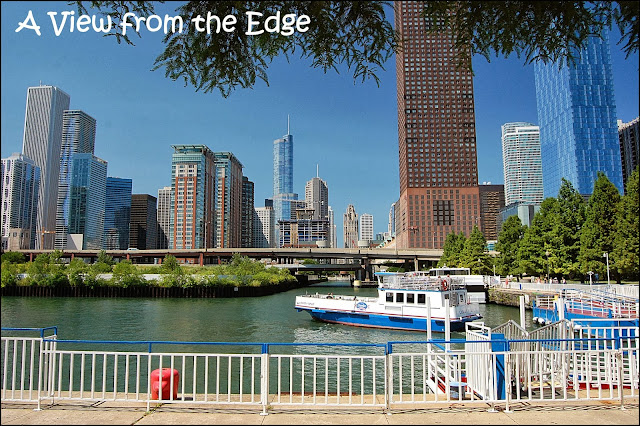 Another view of the beautiful city of Chicago. 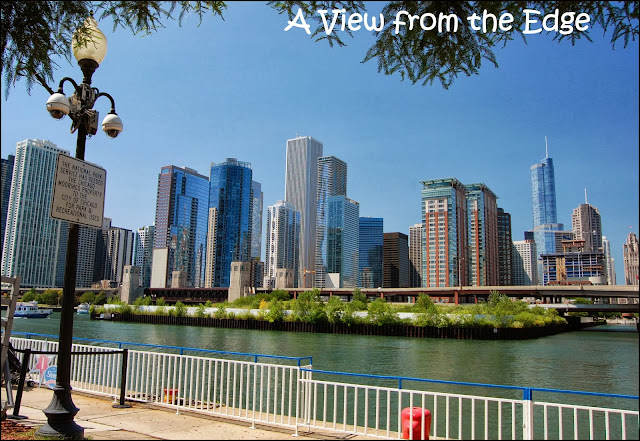 I hope you enjoyed the tour. Be careful disembarking from the boat!

(Again, I relied on Wikipedia a LOT for info, and a little on tour guide information!)
Posted by Pat at 3:42 PM 13 comments

Jim and I took advantage of a beautiful warm sunny day about a month ago and went downtown to Chicago for an architectural tour via the Chicago River.

First we drove to the train station, which is only about 4 miles from our home. I knew it was going to be a good day when I saw what the train conductor punched on our tickets.

We arrived at Union Station, walked outside, crossed the street, then went down the stairs and caught a water taxi to Navy Pier, where our tour boat was departing.

When we disembarked from the taxi, we noticed a line of people standing by a nearby boat. It happened to be the boat WE needed to hop on to see the architectural tour. We arrived just in time!

We had a great tour guide who was full of energy and humor. She spoke non-stop for the whole hour and gave some fascinating tidbits behind the history of some of the buildings. Of course I can't remember them all!

Here are some of the highlights: 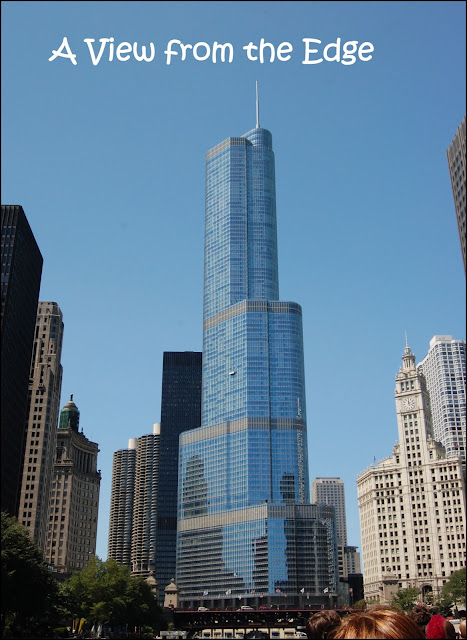 The building is 96-stories high, or 1,170 feet tall. Throw in the tall spire on top, and it is 1,389 feet tall. Inside the building is retail space, a parking garage, a 339-room 5 star hotel, restaurant (also 5 stars), and condominiums. It is the second tallest building in the Western Hemisphere.

The white concrete building on the left is the Merchandise Mart. 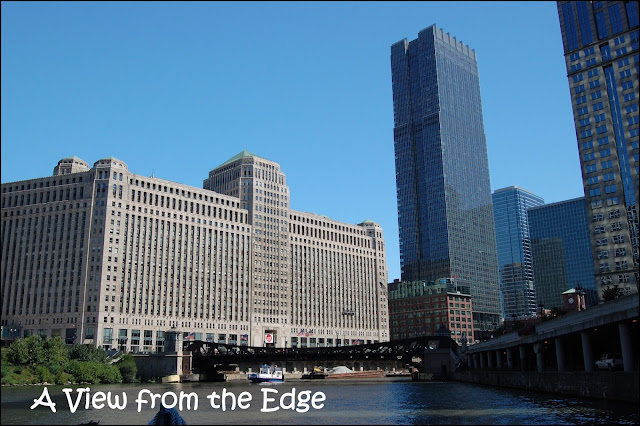 Merchandise Mart was the largest building IN THE WORLD in 1930 at 5 acres and 4,000,000 square feet! It was constructed by Marshall Field and Company. The building was sold in 1945 to Joseph P. Kennedy, father of the future President John F. Kennedy. 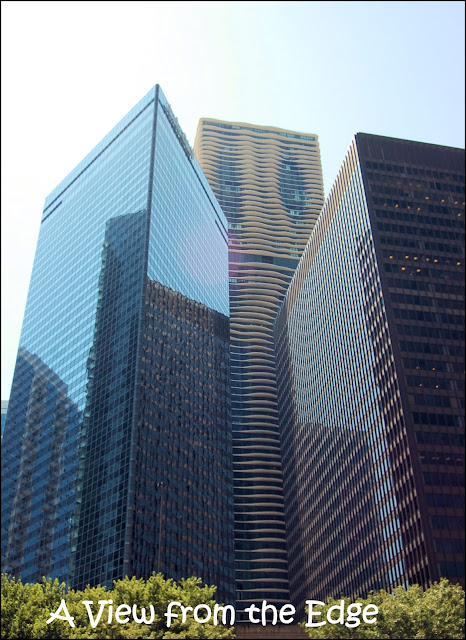 The triangle building on the left is the Swissotel, the building in the center is the Aqua - the tallest skyscraper in Chicago designed by a female architect. It is a residential building. 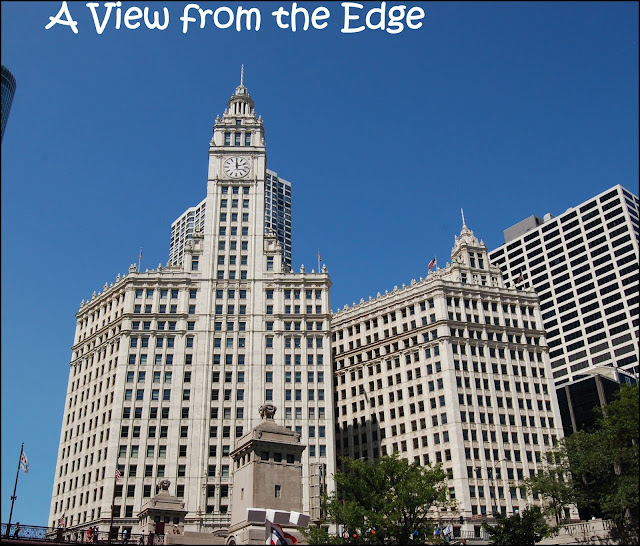 The construction began in 1920 as headquarters for the Wrigley Chewing Gum, by William Wrigley Jr. It consists of two buildings with connecting walkways on the ground level, third and fourteenth floors. The South Tower stands 425 feet, has 30 stories, and a large clock on all four sides. The North Tower has 21 stories. Two interesting facts about this building: 1) It was the first air conditioned office building in Chicago, and 2) if you walk through the center doors, you will end up in a secluded park that overlooks the Chicago River. 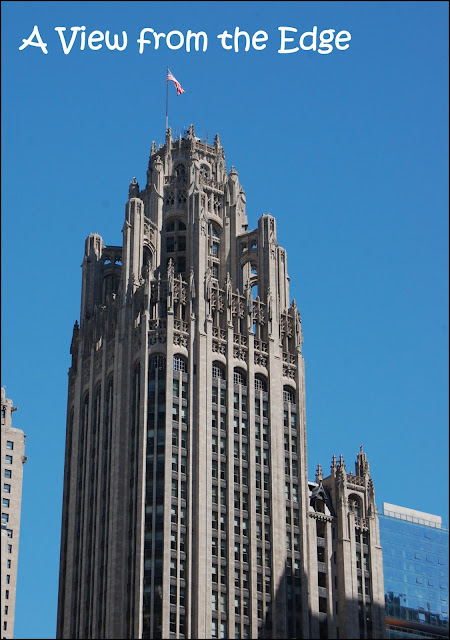 Construction on this neo-Gothic building began in 1923 and took two years to complete. The Tribune ran a contest for it's design, with first place prize being $50,000. That's a lot of dough - at least back in the 1920's!

Next up - Marina City 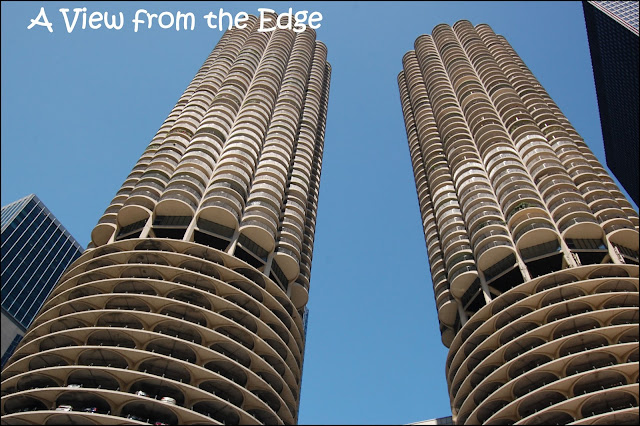 Or fondly called "The Corn Cobs" by Chicagoans. Some interesting facts: This is the first building in the United States to be constructed with tower cranes.

The building was completed in 1964 at the cost of $36 million. The two towers were the tallest residential buildings and reinforced concrete structures in the world. It was considered a "city" within a city because it featured on-site facilities such as a bowling alley, gym, swimming pool, theater, ice rink, stores, restaurants, and a marina.

(I relied heavily on Wikipedia for my information and some was from memory of what the tour guide told us!)