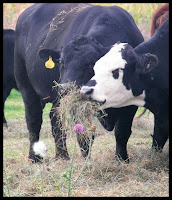 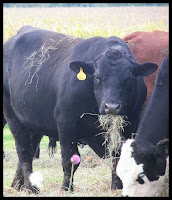 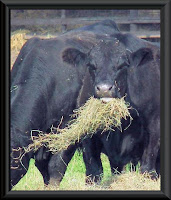 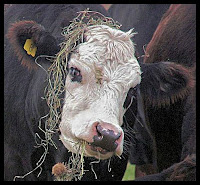 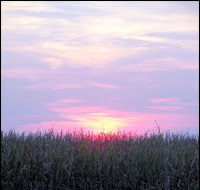 There is a pasture right next to our campground where several cows graze. I’ve come to know their daily schedule – when their morning hay is thrown out for them to feed, when they move to the front of the pasture towards the road to get relief from the hot sun, when they move to the back of the pasture later in the day. They’ve become quite used to me coming up to the fence, clicking away with the camera and talking to them. In the beginning I was charged by a brown bull. It was frightening and I was happy he was on one side of the fence and me on the other. Once he saw that I meant no harm and I spoke calmly and quietly, he just turned and walked away.

I would love to watch them eat the hay. They would immerse themselves in it. They’d grab some hay, throw it up in the air – some would land on their backs, some their necks. Sometimes two cows would be chewing on the same wad of hay and it would look like the scene from the Disney movie, “Lady and the Tramp” when the two dogs share one piece of spaghetti and chew it till their mouths meet in the middle. I loved the stillness of the countryside except for the steady munching of the hay by the herd of cows.

I liked to rip out the tall grass growing along the fence line and reach far over it to feed the cows. Their big, wet noses would sniff my hand and out would come their black tongues to lick up the sweet grass. Their breath would smell like warm milk. One day a cow got a little too close to the electric fence and got a shock from it. I heard the zap and he jumped back and boy did he give me a dirty look. I tried to explain that it was not my fault, but I don’t think he believed me.

I usually tried to capture the beautiful sunsets which always occurred just beyond their pasture. By now the cows were so familiar with me that they would start to congregate near the fence - I suppose hoping for a hand out. I didn’t bring my tripod along for the camera, so I rested my elbow on the fence post to steady my arm, looked in the small viewfinder to focus on the sunset and began clicking away. I didn't realize that the cows were crowding in around me as close as was possible without touching the electric fence. One tall cow, who’s head came over the fence, leaned over and snorted his warm breath and wet nose right in my ear. I let out a yelp because he scared the bejesus out of me, and that, in turn, caused a little stampede! The cows all scattered about 10 feet away from me. After I stopped laughing I told them I was sorry that I had scared them but turnabout was fair play.

I came to love these giant, gentle beasts with their big eyes, long eyelashes and comical ways. I wanted to name each and every one of them instead of calling them by their tag numbers clipped to their ears. I will miss them when we leave here.
Posted by Pat at 9:23 PM 0 comments