No one to bug me anymore...

Did you know that there are NO BUGS in Arizona? Okay, that might be a SLIGHT exaggeration. But there are no mosquitoes, very few flies, and a few bees. The point is, we could leave our screen door open for awhile and not worry about anything flying in, you know?

Apparently, when Jim removed the vent, and drove 50 miles one way to get a replacement part, 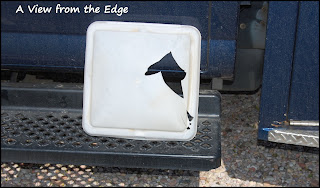 the nearby flies thought the hole was something to be explored and all flew in there like the bats at Carlsbad Cavern, NM: 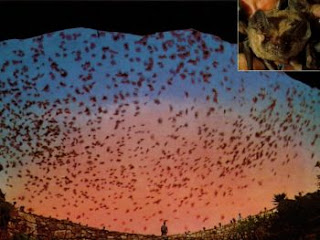 We have been killing, or trying to kill, flies while we've traveled all across the State of Nebraska.

And they are persistent little fu*k*rs!

Either that or I'm a really bad aim.

I think it's a little bit of both.

The other night I was sitting at the kitchen table, just minding my own business, blogging away.

This one fly would NOT leave me alone.

He began taunting me by walking across the monitor a few times. I'd "shoo" him away and continue typing.

He obviously didn't like being ignored. He started landing on my body, crawling up my arms.

By the time the evening was over, I'd look like I went a round with Ali!

I saw him climbing up the curtains. I grabbed a tablet of paper and thwack! A miss!

Okay, this was sad! I got out the big guns....the fly swatter. 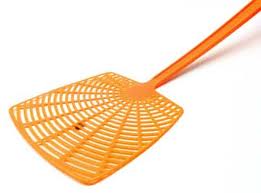 Usually just the sight of the fly swatter keeps the flies away. But this guy was like "The Terminator". 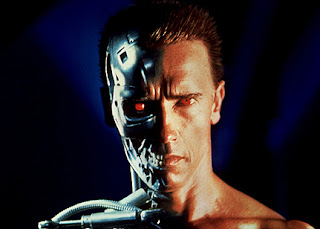 HE wasn't afraid of the EXTERMINATOR!!

He turned into a freaking kamikaze pilot and dive-bombed my ears.

First he went after my left ear. I thought he was going to bore a hole all the way through to the other side! I screamed and slapped my ear!

A few minutes later he dove into my right ear! That's all I heard was that angry buzzing!

I screamed again, slapped my ear, and said a few choice words.

To add insult to injury, he landed on my nose and even my glasses.

I was near tears.


I swung that fly swatter several times at that S.O.B.

Sometimes I hit him and actually stunned him. He spun around in a circle on the table, and I SWEAR he stood up, shook himself off, GRINNED AT ME, rubbed his little hands together, and snickered as if to say, "That's all you got?"

At this point Jim walked into the kitchen to get something. This might not seem significant to you. But you see, we have a sliding glass door that separates the "living room" from the kitchen in the trailer, which is quite nice when I don't want to hear the blasting television. So, Jim opened the door, came in the kitchen for a snack, went back to his man-cave, and within a minute I heard him slapping himself left and right and swearing.

And I knew that I would be bug-free for awhile.

It only lasted till the next day.

The fly was around for a few more days to bug us.

Jim saw it on the wall and quickly reached his hand out and smack! 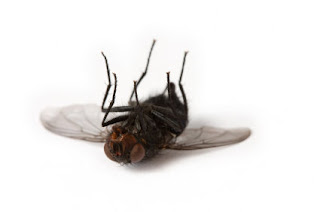 As.a.doornail. (What the hell does THAT even mean?)

I actually was sad. I was getting kind of attached to "Ahnold" the Terminator Fly.

Then I walked into the kitchen and saw ANOTHER fly.

I pointed that one out to Jim.

He grabbed the fly swatter and BAM!

He turned it up a notch as Emerile would say, and we had another dead fly on our hands.

And you know, I really wasn't feeling too bad about it!

Jim's been trying to convince me to buy an electric fly swatter. 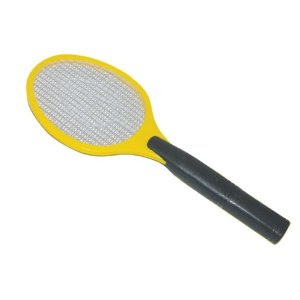 They are available at Amazon for only $6.55. I just might buy myself one!

To see how good YOU are at killing flies, try this game.

My score was sucky.

Like this is a newsflash.
Posted by Pat at 9:54 AM

Email ThisBlogThis!Share to TwitterShare to FacebookShare to Pinterest
Labels: how to kill a fly or not

hahahaha, you just know all the little buggers sit around at night laughing and thinking of ways to torment you guys...

I saw your title and was afraid you had kicked Jim out!!!

We live in Phoenix...and get a gazillion bugs! Cockroaches come out mostly during the rain or change of weather. We also have ants and other small bugs that come out at night in MY kitchen. Dozens of them dancing on my kitchen counters and in my dishwasher. I've sprayed, wiped down with bleach/ajax/etc and nothing does any good. It's like we've got a nest of them...but can't find it.

I so relate. I hate flies and they always bomb me when they're in the room. I also cannot hit a fly, even with a swatter. I jump around the room swinging it and the fly dive bombs my head. Usually I have to call hubs who will hit them with his hand or anything that's available. Always hits them.
So since fly weather is on it's way I suppose we'll have to put up with them.
We don't have many that get inside except when the grand kiddies are here and then I ignore the flies because I'm so involved with the kids.
Blessings, B

Hairspray those suckers. A good shot of hairspray glues their itty bitty wings together. I hate flies and give em shot of it when they get into my house.

I hate bugs!
haha, this post made me laugh, I can picture you both killing flies, I have to say I'm rally bad at killing flies.

Ooops, i meant to say really!

How the hell does an electric fly swatter work???? Glad you got the pests, though.

We love being on the water here in Florida, but we often tell people that AZ is THE place to go if you hate bugs. We never saw a one there the winters we spent in Tucson.
We definitely have our share here in the wetlands. (I posted a flashback about Arizona cacti earlier this week --if I'd seen your post first I'd have mentioned the 'no bug' thing. )

Living in the country thats part of the life for us here. I swear as soon as you get the fly swatter they hide and know . The electric fly swatters are great one touch an ZAP! GOTCHA ! Loved your post I laughed my head off. Have a great day !

I remember my grandmother had those curly, sticker, fly strips hanging in the kitchen. She lived on a farm and the doors were always being opened and shut. Those things were nasty to look at but they sure caught a bunch of flies - - without pesticides.

There were flies buzzing around at the pool yesterday and we had a dead scorpion under the carpet on the patio...but I would rather deal with a few flies or the odd scorpion than the millions of mosquitos we are going to see at home this summer!!!!!

Electric fly swatter is now on my list of things to get. Fortunately we don't get too many flies here but those we do get are determined and hardy. I agree with Brian, you should have video'd......

I LOVED the lack of fleas, flies, mosquitos and other annoying winged things in NM when we lived there. On the other hand, there were the scorpions, fire ants, geckos, etc. But, the lack of fleas was SO NICE!!!