We COULD have spent the day touring Denver, but it was cold and overcast so we decided to lay low and hole up in the trailer. I made some split pea soup, and when it started to rain in the afternoon, we were snug as a bug in a rug.

Thursday morning it was cold, damp, and foggy. Here's what the roads looked like when we pulled out of the campgrounds. 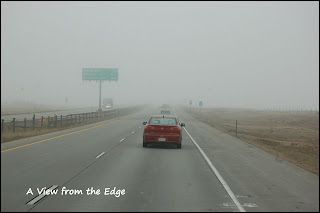 Suddenly we were outside of the fog, with just traces of it left in the air. 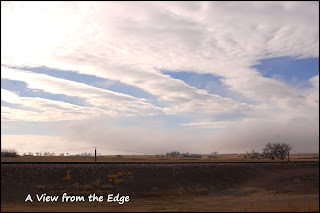 Then it was a sunny day. 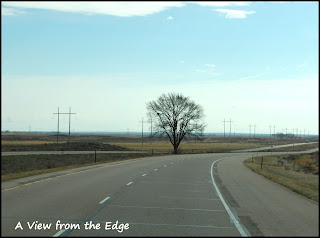 We continued northeast, and a storm began to gather in the west. The sky darkened and clouds formed. I loved the contrast of the dark skies and light trees along the road. 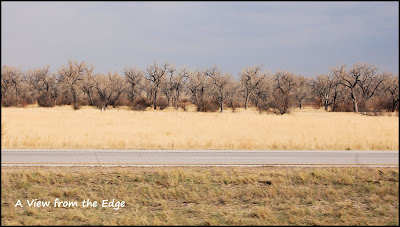 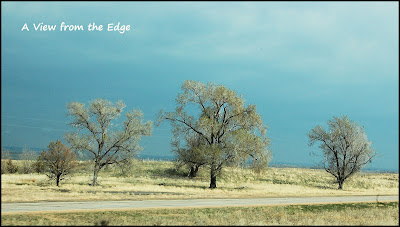 We got off at one particular exit thinking that there was our kind of gas station there. We were wrong. So we hopped back on the highway. We didn't realize that that was our actual exit to Nebraska. Instead of just exiting  at the next stop and turning around, I looked at the map which showed what looked like a straight road across into the next state.

Apparently I was wrong.

About it being  a straight road, I mean.

It was a gravel road. It meandered this way. 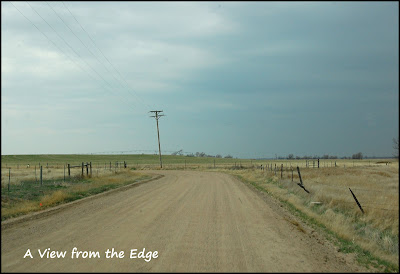 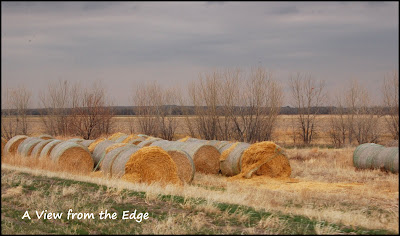 and farms where I bet if anyone looked out the window they'd wonder who the heck was driving down their road? 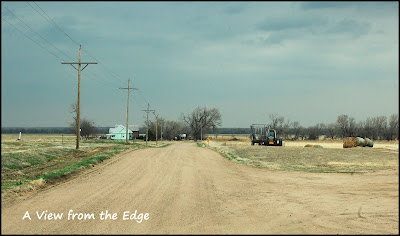 I mean, seriously, even this cow has the expression, "What the...?" as we drove by! 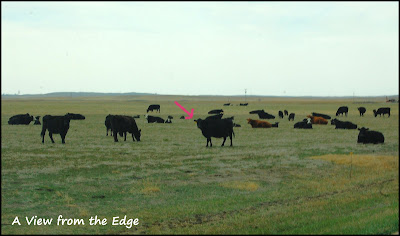 But there was no need to worry my pretty little head about it. With Jim holding his handy-dandy GPS in his hot little hand, and after seemingly driving in circles, we FINALLY connected to paved roads and the State of Nebraska. Ta-da! 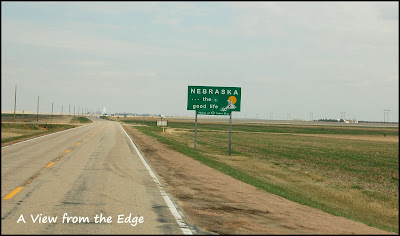 Soon we were passing the area of Nebraska that is known as "sandhills". You can see why. 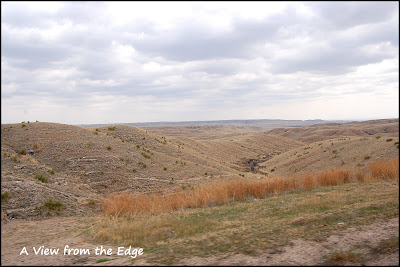 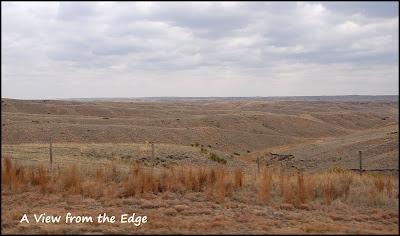 We arrived at our destination of Alliance, Nebraska in the early afternoon. As we were setting up, I noticed that our bathroom vent was broken. We have no idea how this happened. Something must have hit it while we were traveling. I think a bird flew into it. Can't you see the shape of a bird in the cracked part? 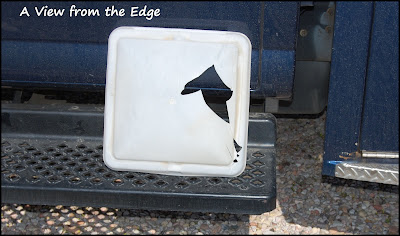 The good news is, there was an RV place available; bad news? It was 50 miles away. So Jim had to drive all the way out there to get a replacement vent cover.

But Friday we had such a fun day. I can't wait to tell you all about it. It will have to wait, though, since it's very late and I'm falling asleep. I already dozed off once and filled the whole page with the letter "k"!

I ppassed by a brand-spanking- shiny new Silver Stream today parked in some lucky families yard.

I've been whining ever since. So I came here to live vicariously through you in that Silver Stream that should be parked in MY yard... :}

after a day of traveling i am glad you had fun on friday...ack on the 50 miles to get the part...at least the gravel road gave you some good pics eh?

I love that new header picture!

I like to be able to track where you're going by the photos you take. Well, not so fun on the gravel road I'll bet.
We don't have a gps but hope the next car we buy will have a good one.
Really appreciate that you are sharing this journey with us.
I always look forward to checking up on you to see what you are doing.
Blessings and safe travels,
Barb

I love that you gave the locals something different to see and that you got a different view than interstate for a few miles.
I, too, love your gorgeous header photo.

split pea soup...yummers;) and the pic of the trees contrasting the sky reminded me of Africa...beautiful :)

No wonder you feel tired, Pat. All that travelling and then some more on top must have been awful. I would be lost here without my GPS so heaven only knows how I'd get on in the kind of country you drove through.

WOW! You've been making progress! Looking forward to hearing about your fun day!

I live vicariously through you!

It felt a bit as if I was right there with you. Thanks for the ride!

I love your sunny day pics!!!

You drove down a gravel road? My, you guys are adventurous!