Dinner AT the Movies

When my son was in town, we went to the Studio Movie Grill in Scottsdale. 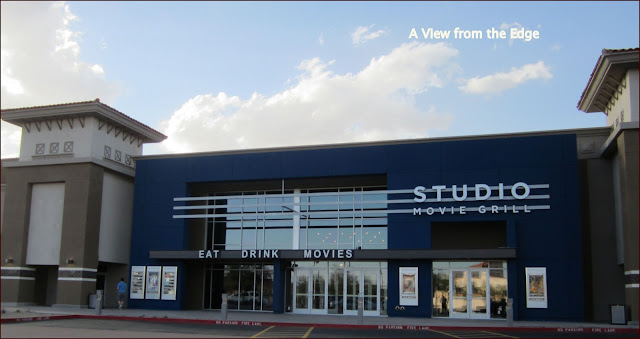 We had never been there before, but I took advantage of a coupon on "Groupon", and thought we'd give this place a try. It's one of those places that you can order food and eat during the movie.

I thought the chairs were comfortable; they were like big office chairs with wheels on them. We sat before a tall counter. There were red "buttons" every few feet. We would press one whenever we needed our server. Here is Jason (son) and Jim (husband) not looking too thrilled that I am taking their photo in the theater! I know, I know, but the movie didn't START! 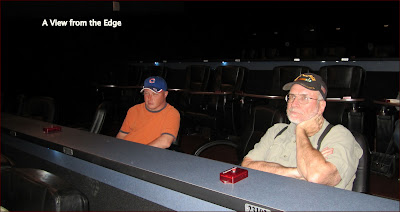 See? Just commercials and such. 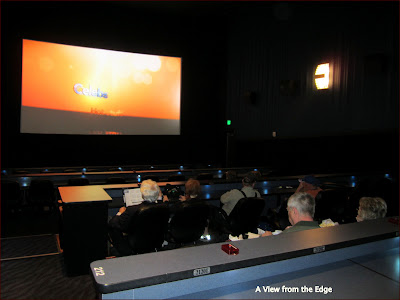 As you can see, there weren't a lot of people there. Of course, it WAS before 5:00 on a weekday!

I don't know if I would go there again. I thought the food was more expensive than a regular restaurant.

We saw the movie, "Safe House" with Denzel Washington and Ryan Reynolds. Have you heard anything about it?

Let me tell you right off the bat that it is violent.

It keeps you guessing.

I yelped and screamed and said, "Oh no!" several times throughout the movie.

Twice I hit my hand on the counter as I was moving it up to either cover my eyes or hold my face. I yelled, "Ow, ow, ow, ow, ow!" I don't know if anyone heard me because a LOT of things were happening on the screen!

I asked my son if he heard me yell during the movie.

"I think EVERYONE heard you."

Here's a brief synopsis of the film from IMDb, "A young CIA agent is tasked with looking after a fugitive in a safe house. But when the safe house is attacked, he finds himself on the run with his charge"

Watch the trailer for it. If you dare.

i def want to see the movie...and the theatre restaurant combo is intriguing and i have been to one...but i too felt the food was way too expensive

Dinner and a movie...at the same time...things dreams are made of and something I may never get to enjoy.

You're right about movie theater food being expensive LOL. All I have to say is "$7 for small popcorn"

Didn't the sound of people eating spoil the movie? Hubs went to one in Australia but I think the set-up was slightly different.

How fun. Tom and I did something like that awhile back. He also wants to see Safe House.

Too scary for me -- I'm a wimp! Curious, did you have ulcers from eating while you were watching all that scary stuff?

Dinner and a movie is an interesting concept but I think a more relaxing movie would be better. I do want to see Safe House, the movie trailers make it look very exciting.