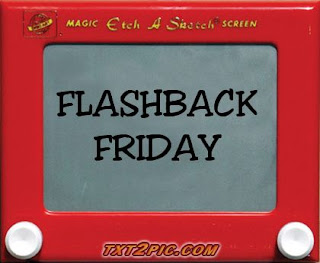 On April 19, 1995 many people were killed or injured when the Alfred P. Murrah Federal Building was bombed. There were 168 men, women, and children who died that day.

A memorial was built on the site of the Murrah building, and on April 19, 2000, the Oklahoma City National Memorial Outdoor Symbolic Memorial was dedicated by President Bill Clinton.

We visited the memorial in January of 2006. All the photos are mine unless otherwise noted.

All information in italics is directly from the memorial's website.

The first thing I noticed before entering the memorial is the fence. It is loaded with trinkets, notes, flowers, etc. from people from all over the world to honor those who have died and survived.

The first Fence was installed to protect the site of the Murrah Building. Almost immediately, people began to leave tokens of love and hope on the Fence. Those items now total more than 60,000 and are collected and preserved in our archives. Today, more than 200 feet of the original Fence gives people the opportunity to leave tokens of remembrance and hope. 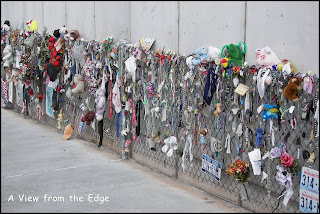 Past the fence is a huge, tall, wall, with a cut-out section to walk through. Along the top it says this: (click to enlarge photo) 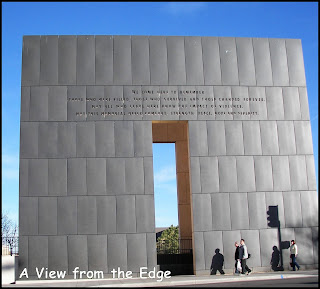 This wall, and the one across the reflecting pool are called the Gates of Time.

These monumental twin gates frame the moment of destruction – 9:02 a.m. – and mark the formal entrances to the Memorial. The East Gate represents 9:01 a.m. on April 19, and the innocence of the city before the attack. The West Gate represents 9:03 a.m., the moment we were changed forever, and the hope that came from the horror in the moments and days following the bombing. 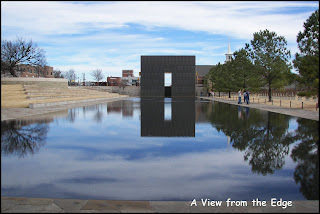 The pool occupies what was once N.W. Fifth Street. Here, a shallow depth of gently flowing water helps soothe wounds, with calming sounds providing a peaceful setting for quiet thoughts. The placid surface shows the reflection of someone changed forever by their visit to the Memorial.

The 168 chairs represent the lives taken on April 19, 1995. They stand in nine rows to represent each floor of the building, and each chair bears the name of someone killed on that floor. Nineteen smaller chairs stand for the children. The field is located on the footprint of the Murrah Building. 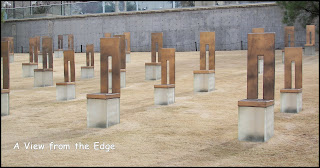 In the bottom of the chairs are lights which turn on at night. It was such an eerie feeling to see those empty chairs, and to see those tiny ones just turned my stomach. 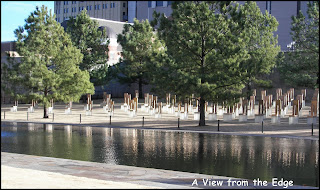 The Survivor Tree, an American Elm, bore witness to the violence of April 19, 1995, and withstood the full force of the attack. Years later, it continues to stand as a living symbol of resilience. The circular promontory surrounding the tree offers a place for gathering and viewing the Memorial. 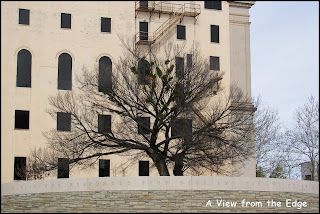 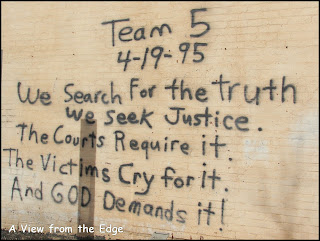 In front of the Museum is the whole children's area. The outpouring from children was overwhelming.

In the aftermath of the blast, children from around the country and the world sent in their own expressions of encouragement and love. That care is represented today by a wall of tiles painted by children and sent to Oklahoma City in 1995. In addition, buckets of chalk and chalkboards built into the ground of the Children's Area give children a place where they can continue to share their feelings -- an important component of the healing process. 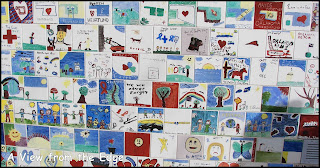 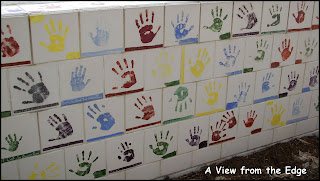 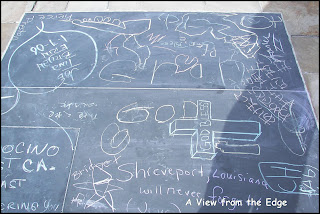 My mother always asked this question. I have to agree with her. 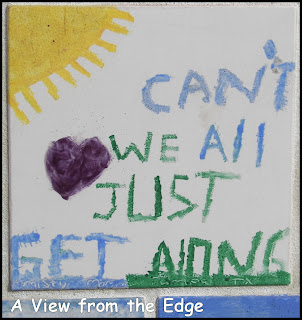 The museum is right next door to the Outdoor memorial, and it is well worth the few dollars entry fee. There is a LOT to see, and you can actually HEAR an audiotape of the bombing during a board meeting. Experience the confusion right after the blast, see a portion of that building that was damaged from the bombing, hear survivor accounts, watch news broadcasts, the world's reaction, the investigation, and anything else you can think of about the bombing. It's true that you might leave there a little overwhelmed, but it left an impression on me and I was truly glad that we visited this memorial. Many, many innocent people were killed that day, but many heroes emerged, too.

And finally, when we left the memorial, this statue of Jesus is directly across the street from it. It is titled, "And Jesus Wept". 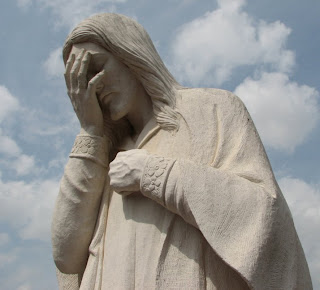 If you should be traveling near Oklahoma City, I would definitely recommend a visit to this memorial. It is very moving, informative, and well worth your time.
Posted by Pat at 7:30 PM

Excellent post and so serious. I look forward to your humor and when I saw what you were writing about, I thought, "No laughs tonight." I love your pictures and the explanations. I did not realize so much had been done in memorials.

i have been there...it was the chairs that haunt me...crying...

Hi Pat,
They actually do have the chewing gum wall in San Luis Obispo. Thanks for coming by Levonne's Pretty Pics and leaving a comment. I appreciate it!. You really put a lot into your blog posts!

A friend of mine worked in that building, and with many of the people/victims of the blast. So sad and such touching photographs.

I'll never forget when this took place, because my dad was dying, of cancer, and he had a hospice bed set up in their dining room. My mom and I (she had Alzheimer's) were in the living watching this on TV. I think my dad slept through it, thankfully.

I love that Survivor Tree.

Loved your post.. while I was reading it I was just about to cry.
Great pictures!
Big hugs,
B xx

What a powerful post! Thank you so much. I have never been there. You're photos are terrific!

It was a sad day in American history.
And the fact that is was committed by a fellow veteran haunts me to this day. How he could turn his back on his own country, and kill all those innocent woman and children is beyond me.

Such a tragedy. I have a friend whose father was killed in this bombing.

You did a stand up job representing this incredible memorial. I have chill bumps and tears. The memorial is a noble tribute to the awfulness of that day and the innocent people we lost.

I am a frequent traveler to New York City and I stay in a hotel right across from Ground Zero. You cannot help but feel the spirit of those we lost on that day when you visit. They too, have a museum that I think everyone who visits the city should make it their number one priority. The years go by and the memory and the sadness and our outrage diminish and it should not be that way. We should never forget any of those who died at the hands of evil like this.

These are wonderful photos of a tradgic memorial. The reflecting pool is amazing!

Just reading your post I relived it as if it were yesterday. When it happened I couldn't believe Tim McVeigh would endanger those children. My heart hurt that day.
Lovely shot of the reflecting pool.
Somber yet beautiful post.

Beautiful. We'll be by OKC when we move so I will definately check this out.

It's a beautiful memorial.

This was a tragic time in our nation's history, I remember the day very well. The memorial is a beautiful tribute to those who died that day.